Racing experience for everyone with Head Worldcup Rebels 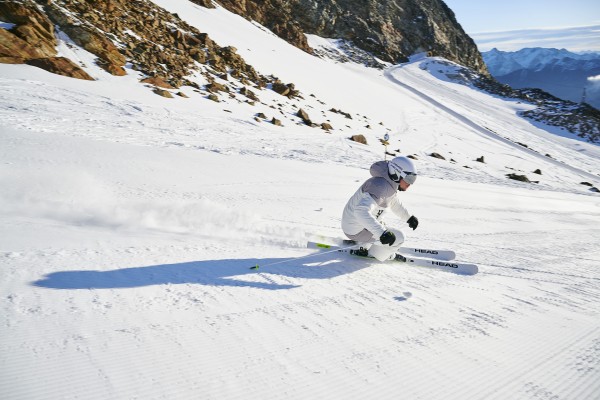 What does a professional skier characterize?

Can we actually ski like the pros if we put the top models of the ski manufacturers under our feets? Unfortunately, no, that will probably not work. To become a professional skier you need hard training, a lot of talent and the willingness to challenge yourself.

Using the example of the company Head we want to bring some light into the darkness of different Racemodels. Only a few ski manufacturers are as committed to racing as the Austrian brand Head from the idyllic Kennelbach in Vorarlberg. The series of top athletes equipped by Head speaks for itself: With Lindsey Vonn, Aksel Lund Svindal, Ted Ligety, Bode Miller, Hermann Maier, Lara Gut or Anna Veith, Head has managed in the recent past and present to place its athletes in all disciplines from slalom to downhill and super-G to giant slalom on all relevant podiums. But you're right to ask: And how do I benefit? The answer is: a lot! Because Head doesn't keep his know-how from years of World Cup experience to himself, they has set the goal to make racing performance possible for everyone and let the knowledge flow into the skis.

World Cup technology for the slopes

With the "Worldcup Rebels" series Head brings not only the quality, also the variety of skiing to the public slopes. This series is not only based on the design of the World Cup models - there is also a lot of World Cup technology in every single ski. The legendary Worldcup sandwich construction (some models refined with Graphene) provides a strong edge grip and smooth running. Because of the Rebel Camber you get a lot of pressure into the shovel. The top models are equipped with the Freeflex Evo binding, which allows the natural dynamics of the ski to fully unfold. And the well-proven Intelligence-technology ensures optimum adaptation to the slopes and skiing style. The diversity is actually so big that it is not so easy to keep a clear overview. To put it roughly, the eight models can be divided into three categories: slalom skis, race skis and combi skis.

The three slalom skis of the Rebel series are characterized by excellent edge grip, short and dynamic radii and a quick edge change. Mobility and agility are the characteristic features of all slalom models. At the top is the FIS-standard Head Worldcup Rebels e.SL RD (RD stands for Race-Department), which is very similar to the original Worldcup models: It combines an extremely aggressive pull into the turn with a good boost at the end of the turn. It's enjoyable, but needs attention: To be handled well, it requires concentration and a good reaction speed. The Head Worldcup Rebels e.SL offers a good balance. Slightly easier to handle without sacrificing torsional stiffness, it is the perfect solution for sporty and powerful skiers who want to carve over the slope in a leaning position and want to count on their equipment at all times. If you like it a bit less challenging, but don't want to miss the grip and agility of a real slalom racer, try the Head Worldcup Rebels e.SLR. Thanks to its Powerrail binding plate, it is slightly more power-saving than its big brothers and adds a shot of comfort to the sportiness.

Racecarver of the Head Worldcup-Rebels series. Are you ready for Speed?

And what about all the skis that are between race and slalom carvers? They are intended for those who don't care about FIS standards for racing ski construction, but still don't want to miss out race technology. The Head Worldcup Rebels e.Race as well as the Head e.GSR and the Head e.Shape Pro are excellent combination racers, which are positioned exactly between the Racecarvern and Slalomcarvern. They combine agility with smooth running and thus the best of slalom and race. The Head Worldcup Rebels e.Race is characterized especially by its aggressiveness, and shows especially at medium radii what it is made of. The Head Worldcup Rebels e.GSR offers a perfect entry into the racing experience without overtaxing the driver. And the Worldcup Rebels e.Shape Pro is exactly the right one, if you want to ride like Ted Ligety, but don't have thighs like a mast bull.

Conclusion: Head offers an excellent ski selection for every type of skier.

Head is regarded as a specialist for good skiers. The Race-range speaks for itselfs: There is just something for everyone. All you have to do is to decide now.

Tags: Racecarver, Slalomcarver
related blog posts
Redster Series from Atomic: Skis for each type...
Fischer RC4 The Curv: The perfect turn
Racecarver and Allmountain-Ski in one: Is the...
Amphibio and Truline Technology from Elan: One...
Völkl Racetiger: The classic among the race...
Trusted Shops Reviews Toolkit: 1.1.5
This website uses cookies, which are necessary for the technical operation of the website and are always set. Other cookies, which increase the usability of this website, serve for direct advertising or simplify interaction with other websites and social networks, will only be used with your consent.
Decline Accept all Configure