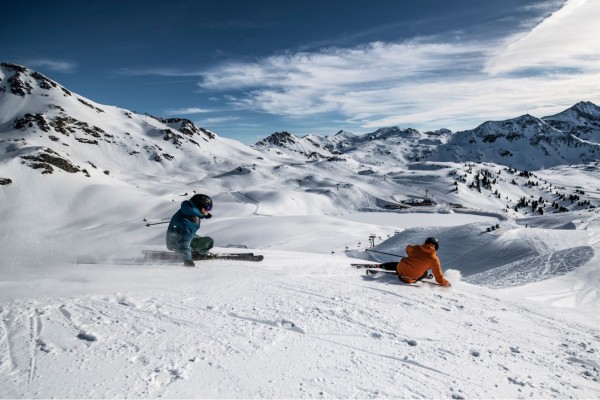 The official slogan of the traditional Slovenian ski manufacturer is "Always Good Times", but if you take a look at what Elan is doing, you could imagine one or the other (somewhat longer) slogan. For example this one: Once you've invented a technology that works well, you stick with it and use it in as many ways as possible.

That's exactly what Elan does with its legendary Amphibio technology: since the first ski with this technology was launched in 2010, Elan has stayed with it. And that's not all: because it worked so well, Elan has used it not only in the Amphibio series of slopes, but also in the Elan ladies' skis and Allmountain skis. Another motto of Elan could be: The fact that a technology works well does not mean that it cannot be improved. This winter, Elan is already launching the third generation of amphibian skis on the market and has made further major improvements with the brand new Truline technology.

But what exactly does that mean: amphibian and truline technology? What is the difference between these skis and others, and what is the benefit for the skier?

The idea behind the Amphibio principle is surprisingly simple: In order to combine the precision and edge grip of a racing ski with the easy turnability of a rocker, Elan builds skis with asymmetrical profiles, where the left and right skis are exact counterparts. What does this mean? If you strap the skis under your feet the right way round, you will have a traditional skis on the inner edges, pre-tensioned to the tip of the ski, which allows a precise and sharp turn initiation and a stable edge grip over the entire length of the ski. The outer edge, on the other hand, ends at the tip of the ski in a bend that works like a rocker, forgiving the mistake and guaranteeing smooth and easy transitions from turn to turn.

With the new Truline technology, Elan is now further extending the principle of asymmetrical skis: The aim was to help the skier to draw clear, parallel lines into the snow as far as possible and to be able to make clean turns. The solution: a strategic and again asymmetrical distribution of the material. In order to achieve an improved edge grip and increased stability, more harder and heavier materials are used on the inside of the skis. And to achieve an efficient energy transfer from turn to turn and a smooth and easy turn, the outer edges are particularly light.

And that applies to a whole range of very different skis.

Elan Amphibio: sporty and easy to turn at the same time

On the one hand there are the top slope carvers from the Amphibio series, the brand new Elan Amphibio 18 Ti2 and the Elan Amphibio 16 Ti. Both skis are relatively similar: both are at home on the groomed slope with a 73 mm middle width, but also work on more worn out tracks or with a few turns next to the slope. However, they are rather nothing for extended excursions into deep snow. Both skis are suitable for long turns as well as for short turns on narrow slopes.

Thanks to the combination of hardwood frame and softer wood core with RST sidewalls, both skis offer optimised power transmission, smooth flex behaviour and strong edge grip. The flex is further improved by the integrated Fusion X binding system, which further increases turn initiation and reaction speed. The package on both skis is completed by the Nano Tech running surface, which improves the gliding properties and durability of the skis thanks to the integrated carbon nanoparticles.

The only difference? The Elan Amphibio 18 Ti2 has a double titanium inlay over the wood core instead of a single one - which makes it even more torsion-resistant and stable even at high speeds, but also a bit more power-intensive to drive. This makes it the ultimate ski for speed-obsessed top riders who don't want to do without versatility.

The Elan Amphibio 14Ti and the Elan Amphibio 12 C go a step further with their 76mm midwidth towards versatility and playfulness, without having to forego good edge grip on hard slopes. The RST sidewalls and the poplar wood core with vertically applied laminates are responsible for this. Especially the Amphibio 14Ti doesn't have to hide from its narrower namesakes in terms of sportiness with its titanium inlay. And also the Amphibio 12 C offers a lot of stability thanks to the carbon reinforcement, even if it makes it a little easier if you want to ride a little more comfortable.

In the new Wingman series, Elan has also used the Amphibio profile and Truline technology to make the benefits available to skiers who want to be on the slopes just as often as off-piste, and who occasionally want to take a detour into deeper powder snow.

The Elan Wingman 82 CTI, for example, is the perfect companion for all types of terrains, ensuring that you never want to stop skiing. Thanks to its Titanal inlay, wooden core and SST sidewall, it is always stable on the edge, the longitudinal carbon rods deliver an extremely dynamic rebound and the light shovel lets it float over deep snow.

Similarly versatile is the Elan Wingman 78 Ti. This ski is particularly forgiving and energy-saving - and therefore also suitable for skiers who want to try out any type of terrain despite little experience.

Tags: Slalomcarver, Racecarver, Allmountain Ski
related blog posts
Elan SLX - sporty slalom ski and all-rounder
Racecarver and Allmountain-Ski in one: Is the...
Head Shape: Less weight, more technology, more...
Salomon S/Series: comfort, fit, performance
Redster Series from Atomic: Skis for each type...
Trusted Shops Reviews Toolkit: 1.1.5
This website uses cookies, which are necessary for the technical operation of the website and are always set. Other cookies, which increase the usability of this website, serve for direct advertising or simplify interaction with other websites and social networks, will only be used with your consent.
Decline Accept all Configure