Racecarver and Allmountain-Ski in one: Is the Völkl Deacon able to do this? 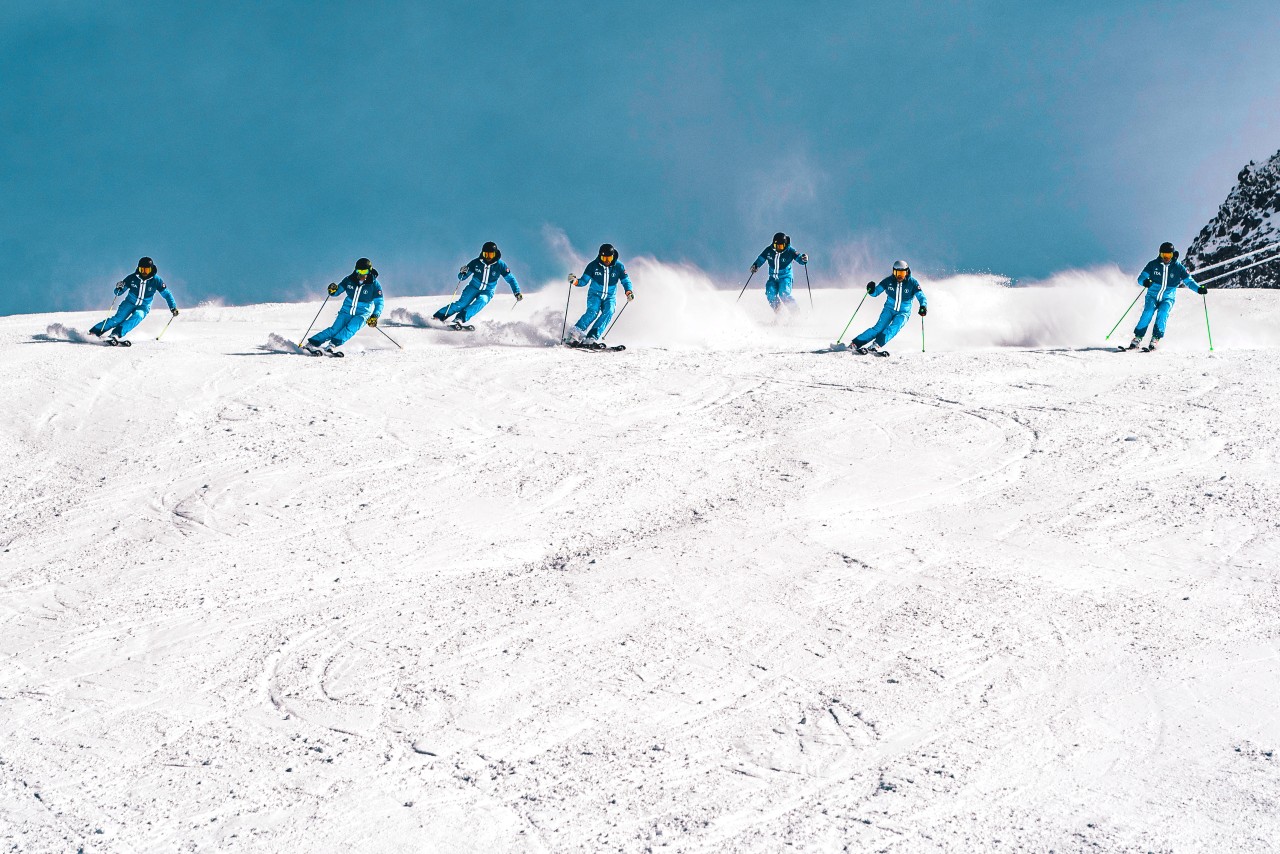 One thing always remains the same when skiing, namely that everything is always different. Anything can happen during a week of skiing: While you may still be dependent on extremely scarce artificial snow on the first few days of skiing, a few days later cubic metres of fresh powder snow may have fallen again.

One ski for all slope conditions?

With all these changes, the desire to have the perfect ski for every situation often arises: A Racecarver, a Slalomcarver, an Allmountain-Ski, a Freerider.... But firstly, hardly anyone can afford it, and secondly, transport would be a logistical horror scenario. The idea of relying on a ski that works well in all situations and combines the positive qualities of all the others is obvious.

Of course, most ski manufacturers have already come up with this idea and try to develop such a ski, sometimes with greater success, sometimes with less success. Last winter, for example, the traditional Bavarian manufacturer Völkl made a new launch with the Deacon series and this winter added four very different models. We looked at the models in the Deacon series and tested what they were capable of.

For sporty and active skiers who only want to take one pair of skis with them on their skiing holidays, but don't want to sacrifice agility and variability or stability and sportiness, the all-mountain racers in the Deacon range are still a good choice.

The Völkl Deacon 74 is aimed primarily at lovers of short and medium radii and, with its agility, sportiness and versatility, is a loyal companion from early to late.

In addition to the two full-surface titanal belts, the 3D.Glass technology ensures smooth running and edge grip. As the name suggests, it consists of a sophisticated application of fibreglass inserts: In the front and rear part of the ski, the fibreglass structure is guided vertically upwards and outwards over the sidewall. This improves edge grip on ice on the one hand and increases dynamics when changing turns on the other. The single layer of glass under the binding in turn ensures suppleness and radius variability.

All that's missing is the ability to turn in sulz and powder. This is ensured by the XTD Tip&Tail Rocker, an element that is certainly unusual in a ski as suitable for racing as the Völkl Deacon, but works surprisingly well. With the Deacon, Völkl has succeeded in combining easy turn initiation and turning pleasure with stability and edge grip in one ski thanks to the flat tip and tail rocker in combination with the traditional preload under the binding.

All this makes the Deacon 74 a hit with friends of a sporty and aggressive skiing style who still don't want to do without a certain playful element.

Völkl Deacon 72 Master: Can you master the slopes too?

Only the brand-new Völkl Deacon 72 Master is even more aggressive and agile. In addition to the tried-and-tested technologies, the main reasons for this are the modern Tailored Carbon Tips, the high-quality full-esha core installed over the entire length of the ski and the narrow 72mm centre width.

One of the new technologies used in the Master models is Tailored Fibre Placement (TFP for short), which replaces the UVO 3D damping system of the Deacon Pro models. In this innovative manufacturing process, carbon fibres in the blade area - the Tailored Carbon Tips - are stitched onto the base material for the Master models in such a way that the torsional stiffness can be adjusted in a targeted manner. The ski's handling characteristics can be decisively controlled via the fibre orientation and thickness as well as the angle of the inserts: The dynamics are directed via these fibres to the areas of the ski where they are needed. The result is a reliable shovel through which the ski can be controlled precisely and directly and where energy is built up quickly. Further advantages are an agile pull-in that requires less effort, as well as even more dynamic skiing fun.

Another highlight is the high-quality core made of full ash, which is installed over the entire ski, as was previously only the case in professional racing skis for World Cup athletes. Due to the elastic property of the hardwood, the full ash core acts like an energy store: when entering a curve, the fibres expand due to the bending of the ski. In this way, energy is built up, stored and then released again at the right time on exiting the turn. The combination of Tailored Carbon Tips and the ash wood core creates a progressive energy build-up. First the Tailored Carbon Tips provide a fast and precise shovel response, then the energy is built up evenly and in a pleasant dosage from the front to under the foot. Because the fibres of the ash wood expand, the ski adapts to the ground at the same time and can thus be controlled better over the entire length. The result: unrestricted dynamics, enormous stability and reliability, as well as a particularly smooth ski ride.

This means that the Deacon 72 Master is certainly not intended for the occasional skier in northern Germany, but a ski instructor, a trainer or even a highly athletic recreational skier could be tempted.

Power transmission and manoeuvrability are further improved by the new IPT Lowride binding system, in which crucial functions of the binding have been technically intricately relocated into the ski body, making it approx. 400 g lighter and offering a standing height one centimetre lower than the predecessor model. This allows for a faster, more effortless edge change and provides a degree of agility that was previously unusual for skis of this width.

The 3DRidge, a ridge running in front of and behind the binding and tapered towards the edges, combines low weight with high torsional stiffness, perfect edge grip over the entire length of the ski and optimum control.

Both models are optimised to make a sporty to highly sporty skier independent of the constant changes in piste conditions to which he is exposed over the course of a long ski season. The Titanal Frame of the Völkl Deacon 84 therefore offers professional skiers the highest level of precise power transmission and absorption. The Glass Frame of the Völkl Deacon 80, on the other hand, gives a wide range of skiers effortless access to dynamics, sportiness and effervescence.

For those for whom that's still not enough, Völkl is bringing a new premium model to the slopes this winter in the form of the Völkl Deacon V-Werks Lowride, which once again sets new standards with its technologically advanced equipment. In principle, this ski is the luxury version of the already extremely luxurious Völkl Deacon 84: the centre width and radii are exactly the same, but the Deacon V-Werks replaces the fibreglass with carbon. Völkl uses the elaborate Tailored Carbon process on the Deacon V-Werks not only in the shovel but also in the ski tail.

This has several advantages for the skier: Firstly, at 1830 grams on 177 centimetres (without binding), the Völkl Deacon V-Werks is quite a bit lighter than the Deacon 84. And secondly, the differentiated tuning of twisting and bending characteristics ensures that this ski can be controlled precisely and directly with reliable power transmission on the one hand, and favours dynamic and aggressive skiing with its agile turn initiation on the other, and that it is easy to control and can cope with difficult conditions without much effort. This versatility and variability makes the Deacon V-Werks the right choice for sporty skiers who want to really indulge themselves.

Tags: Racecarver, Allmountain Ski
related blog posts
Lighter, stronger, better? The...
Salomon S/Series: comfort, fit, performance
Amphibio and Truline Technology from Elan: One...
Head Shape: Less weight, more technology, more...
Trusted Shops Reviews Toolkit: 1.1.5
This website uses cookies, which are necessary for the technical operation of the website and are always set. Other cookies, which increase the usability of this website, serve for direct advertising or simplify interaction with other websites and social networks, will only be used with your consent.
Decline Accept all Configure