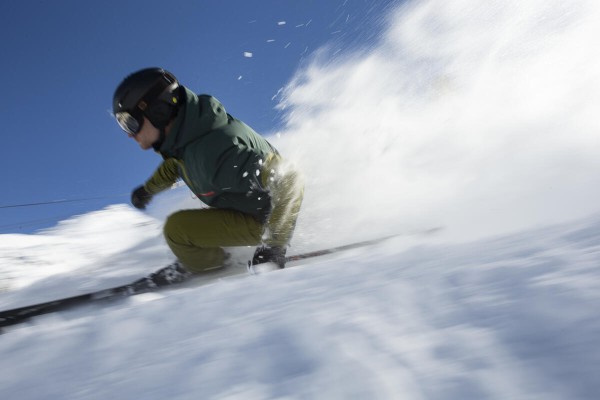 What is it that attracts us to the slopes every year? For the French ski boot and ski manufacturer Salomon, the answer is clear: it's the simple but thrilling adrenaline rush that comes when we start our first turn on groomed slopes, the acceleration, the inclination and power when riding on the edge, the flow from one turn to the next and the risk and speed involved. Salomon calls this feeling the "blast".

To make this feeling available to skiers of all classes, from beginners to experienced skiers, Salomon launched the S-Race and S-Max ski series last year.

However, as everyone knows, even the best skis are useless without the right boots. There are a number of reasons for this: The ski boot transfers the power from the body to the ski. The more compact the boot is and the better it is constructed, the better the control of the skis is. But of course a ski boot shouldn't sit too tight either, because if you have pain while skiing, you are unlikely to enjoy the described feeling of enthusiasm, but rather suffer intense frustration. The weight of the shoe also plays a role, because the heavier the equipment, the faster tiredness sets in.

Actually, Salomon had already solved these requirements quite well before. The X-Pro and X-Max ski boot series were among the most powerful and best fitting ski boots of recent years. But that's not enough for the Salomon team and that's why they came up with something for the boots to make the blast-feeling even better on the slopes.

The result: the series Salomon S/Max and Salomon S/Pro

In order to improve power transmission, Salomon has come up with a completely new design for the new Salomon S/Max and S/Pro series: The core of the shoe has a thinner housing with a built-in frame reinforcement, the so-called core frame, which not only makes it lighter, more agile and more sensitive, but also provides an improved ground feel and optimized power transmission to the edges. In combination with the Sense Amplifier technology, it ensures a progressive and precise turn initiation, a faster edge change and acceleration at the end of the turn. The seamless liner also contributes to power transmission and comfort. The easy and quick adaptability puts the crown on the whole.

Salomon's S/Series boots offer the perfect solution for skiers looking for performance without sacrificing comfort, helping to ensure that the next blast moment will not be long in coming.

Which S/Series shoe is right for who?

The Salomon S/Pro 130, Salomon S/Max 130 and Salomon S/Max 120 models, which with their stiff to very stiff shell are primarily designed for optimum power transmission and precision, are aimed at sporty to very sporty drivers.

The Salomon S/Max 110 W and Salomon S/Pro 100 W models are particularly suitable for sporty and performance-oriented female drivers. In addition to their powerful power transmission, these models are also distinguished by their female-specific design and, in particular, their calf adaptation that is tailored to the needs of women.

Tags: Ski boots
related blog posts
Racecarver and Allmountain-Ski in one: Is the...
Head V-Shape: Less weight, more technology,...
Amphibio and Truline Technology from Elan: One...
Sporty slope skis from Fischer: the perfect fit...
Trusted Shops Reviews Toolkit: 1.1.5
This website uses cookies, which are necessary for the technical operation of the website and are always set. Other cookies, which increase the usability of this website, serve for direct advertising or simplify interaction with other websites and social networks, will only be used with your consent.
Decline Accept all Configure