Next Level: The brand new Disruption series from K2 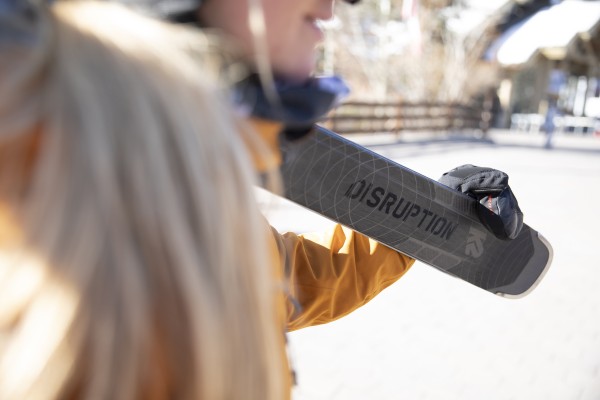 Disruption? What does it mean?

According to Wikipedia, disruption means "as much as interruption, disruption, breakage, disorder or destruction" and refers to a process in which something existing (and quite successful), such as a technology, product or service, is displaced by something newer (and supposedly better) and (almost) completely replaced. So when K2 launches a completely new ski series this winter and calls it "Disruption", it is definitely an announcement to the competition and a promise to us skiers. In its official corporate statement, K2 even states: "With Disruption, K2 wants to vandalize existing structures in order to create something new.

Well roared, lion! But of course such announcements make one a little skeptical: Do the new skis from K2 really live up to the name? Or is it simply a case of repackaging old familiar things?

K2 Disruption: Even better than K2 Charger and K2 Ikonic?

One thing can be determined directly: They are brave here at K2. Because the two ski series - the K2 Charger slope carver series and the K2 Ikonic all-mountain series - which will be replaced this winter by the new Disruption series, have been developed over many years and have quite rightly earned themselves an extremely good reputation.

Dark Matter Damping sounds pretty cool. The largest innovation K2 brings to the new skis is something that they call "Dark Matter Damping". K2's "Dark Matter" is a construction in which a polymer damper is strategically placed between two layers of high-strength carbon along the edges of the ski. And in this form it is indeed something new. Above all it is new how well it works. The Dark Matter damping reduces vibrations extremely effectively, ensuring optimum edge contact and perfect control, especially in hard and icy snow. And with exactly this edge grip and control, you can ski faster and more aggressively and make your turns even more precise. Which brings us back to the centrifugal forces, whose effect on the Disruption ski can be exposed to almost galactic proportions

The PowerWall technology makes another important contribution to optimum edge grip, and thus also to ski control. The use of a second ABS sidewall, which is laminated and connected to the wood core in the central area of the ski, optimizes the power transmission of the ski many times over

The sidewall extends to the center of the ski, which transfers the skier's force directly and precisely to the edge. This seamless connection of the core and the sidewall is also something new in this form and provides a full edge grip without too much effort.

For basic stability and precision, the new I-Beam technology has been installed. Carbon I-Beam or Titanal I-Beam is used depending on the model of the Disruption collection. In both cases, these Titanal or Carbon inserts provide more stability, precision and energy transfer along the entire length of the ski. And even though stabilizing insoles of this type may well be considered standard in the ski industry above a certain price range, it is again surprising how well they work in this case. A further innovation is the shovel geometry, which in combination with Dark Matter damping ensures that the skis of the Disruption line can be pulled into the turn very easily and forgivingly.

None of these technologies in itself is certainly a breakthrough enough to be called a disruptive technology or a reinvention of skiing. But what certainly reaches a new level of quality is the extremely good interaction of the individual elements. The whole disruption concept is simply quite consistent throughout the series. Perfect edge grip, easy turn initiation, smoothness, agility: it's just really fun to ski the Disruption skis. And it's amazingly easy to get the skis to do exactly what you want them to do. And this applies to all models of the Disruption family, as different as they might otherwise be.

In place of the more slope and speed-oriented Charger series, the models K2 Disruption MTi, K2 Disruption STi or K2 Disruption SC are being launched. With their relatively narrow mid-widths, all three models are particularly at home on groomed slopes, but thanks to the SpeedRocker they also work in fresh snow. With its comparatively large radius and Titanal beam, the K2 Disruption MTi is the high-speed weapon in the Disruption family. It runs surprisingly smoothly, even when the ground is a bit rougher and just when things get a bit faster. Or rather: really, really fast. The Disruption MTi can also be pressed into a shorter turn with astonishing ease if necessary, and has no problem meandering agilely through snow.

The K2 Disruption STi with its tighter radius is even more agile, an extremely precise ski with which turns can be approached and negotiated very tightly, elegantly and rakishly, but which, thanks to the titanium inlay, keeps its track easily even at high speeds.

Similarly agile is the K2 Disruption SC, which is even easier to handle thanks to its carbon inlay and slightly wider center, and which, in addition to its safety and smoothness of running, also offers a great deal of comfort

The all-mountain oriented Ikonic series is replaced by the broader models K2 Disruption 82 Ti and K2 Disruption 78 Ti.Both skis are surprisingly agile for all-mountain skis, even though they naturally cannot keep up with the narrower slope models in this respect. On the other hand, thanks to their higher center width, they develop their strengths especially when the slope no longer really looks like a piste.

Above all, the K2 Disruption 82 Ti ploughs over everything that may get in the way of the skier on his descent and keeps its track without any ifs and buts. But also the slightly narrower K2 Disruption 78 Ti copes with all conditions without problems. Above all the simple turn initiation in connection with the high sportiness knows to convince.

Of course, women's skis with Disruption technology should not be missing. The K2 Disruption MTi Alliance and K2 Disruption SC Alliance are the counterparts to the correspondingly named men's models, and are in no way inferior to them. With these models, the K2 Womens Alliance complements the K2 Ladycarver Anthem series with two extremely high-quality alternatives. The K2 Disruption MTi Alliance is a ski that can handle even the highest speeds with extreme smoothness, while remaining extremely supple and providing an amazingly comfortable ride. In short: a ski you can rely on, no matter what you're up to. The K2 Disruption SC Alliance with its carbon inlay is even easier to handle and with its shorter radius it is even more agile.

With all these models, K2 may not be reinventing skiing, but it is (once again) making it a little better.

Tags: Racecarver, Slalomcarver
Trusted Shops Reviews Toolkit: 1.1.5
This website uses cookies, which are necessary for the technical operation of the website and are always set. Other cookies, which increase the usability of this website, serve for direct advertising or simplify interaction with other websites and social networks, will only be used with your consent.
Decline Accept all Configure