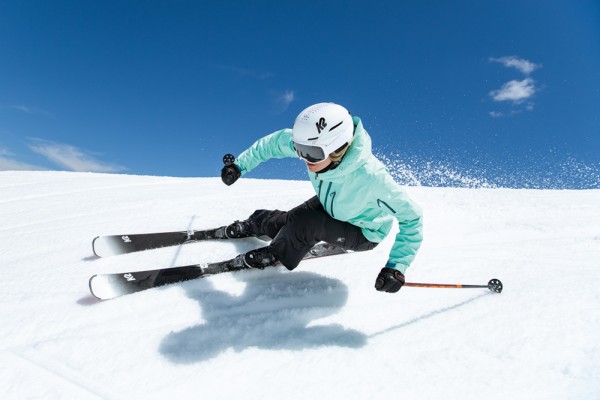 Our customers often ask: Why exactly are there extra skis for women? Aren't these skis actually the same as the others, only differently designed? Or even worse: Aren't those skis just not as good as the others, softer and more easily start to vibrate?
Good questions. But not so easily answered. Because of course there are a lot of different women's skis, and what is right for someone doesn't have to apply to the other. That's why these questions can only be answered in a practical way by taking a look at some specific women's skis and looking at what exactly differentiates them from other skis and what these differences mean for you.

The new Anthem women's ski series from K2 is particularly suitable for this. Firstly, they are new and secondly, K2 was the first brand that focused on women's skis. For more than twenty years K2 has placed a high value on the development and construction of women's skis.
They cooperate with the K2 Womens Alliance, a group of female skiers, who actively participate in the development of the skis and test prototypes extensively to make sure that the theories of the developers work in practice.

What is the difference between Anthem women's skis and the men's skis?

An important anatomical difference between men and women for skiing is that the centre of gravity of a woman's body lies further towards the hip. And because skiing is all about shifting the center of gravity at the right moment, conventional unisex skis do not always make it easy for women to initiate turns. This problem is often solved by mounting the binding a little further forward on women's skis in order to shift the centre of gravity to the front and make turning easier.

K2 moves one step further. For the Anthem skis, a construction was developed that is designed fundamentally to optimally fulfill the needs of female skiers with the shape, flex and material distribution of the ski. BIOkonic-Stance Forward System and the Correct Flex principle are important factors here. Sounds complicated, but is actually quite simple: On the one hand, heavier and harder materials are used under the edges and lighter materials are used in the middle of the ski, thus combining stability and edge grip with low weight and easy handling. On the other hand, even in the shorter lengths, the construction avoids that the ski centre under the binding becomes excessively stiff and that the ski bends evenly.

From beginner to expert: The right K2 Anthem for any female skier

The result: more fun for female skiers. But of course not all female skiers are the same and every skier has different needs. To meet all demands - from beginner to expert, from skier to freerider - there is a whole range of Anthem women's skis.

The top model is probably the K2 Anthem 72 Ti. This very sporty and challenging ski is designed for female skiers who want to carve dynamically on hard slopes, who like to ski short to medium radii, but also want a stable and smooth ski on wide slopes with high speed. Especially its Race Carvern inspired construction with speed rocker and a titanium inlay makes it to a real slope machine.

In contrast, the K2 Anthem 74 is made of glass and carbon fibre, which make the ski easier, more dynamic and more playful to ski. The Anthem 74 is the right choice for women who want to ski on the most challenging slopes of the ski resorts, but also want to make their turns effortless on normal slopes. The ski is characterised by its turning ability and high stability at high speeds.

K2 Anthem 80 shows its wider width first. In addition, it is the Anthem ski with the largest radius, which makes it the ideal ski for female skiers who prefer to take large turns at high speed. With the Anthem 80 you can enjoy yourself as an advanced skier as well as an expert in the ski area for all conditions. The wider centre also makes it an all-rounder that performs great, even if you want to try out the off-piste area. So it offers endless possibilities!

The K2 Anthem 78 is constructed for ladies who prefer to be on the slopes. The ski is designed for intermediate skiers to experts who know exactly what they want to do on the slopes: have fun in all conditions! With 78mm under the binding, the Anthem 78 is suitable for short as well as longer turns.

With the K2 Anthem 76, K2 has also built a very pleasant ski that is equipped with the latest BIOkonic technology and, thanks to its lightweight construction and catch-free rocker, can be turned so easily that female skiers can concentrate on the essentials: having fun on the slopes.

Of course, the ski boots are especially important to have fun while skiing. K2 has also given a lot of thought to the needs of female skiers in this sector. The result: the new K2 Anthem ski boots offer something special - they are quite light.

The construction of the cover has been optimized with different types and thicknesses of plastic so that there is enough material at the crucial points and unnecessary material can be saved. At the points where the boot meets the binding and at the back of the boot, stiffer plastic has been used to optimally transfer the power to the skis.

It is also important to know that women's calf muscles start at a deeper location than men's, which makes it extremely important to have special women's models that take this anatomical feature into account when buying ski boots. For this reason, the K2 ski boot shaft is designed specifically for this special characteristic.

In order to ensure that the different female skiers with their different needs are also satisfied with the boots, there is of course the right boot for every type of skier: the most important difference is certainly the flex, i.e. the hardness of the boot. The general rule is: the more athletic the skier, the harder the boot should be.

A ski with hard materials like Titanal, such as the Anthem 72 Ti, works best in terms of power transmission if it is also used with a correspondingly hard or stiff ski boot, such as the K2 Anthem 100 MV. The aim is to ensure that the force is not lost - it is transferred directly from the ski boot to the ski.

A beginner or a more comfortable driver might be overwhelmed by a boot that is too hard and should rather orientate towards a softer boot.
Of course, the Anthem shoes can be adjusted by heat, so that each boot can be adapted by the local boot-fitter to the individual needs of the rider. Thanks to the EasyFit instep feature, you don't have to struggle into the boot in the morning!

Find out more about K2 Anthem 72 Ti in our SKITEST Women's skis:

Tags: Women's Ski
Trusted Shops Reviews Toolkit: 1.1.5
This website uses cookies, which are necessary for the technical operation of the website and are always set. Other cookies, which increase the usability of this website, serve for direct advertising or simplify interaction with other websites and social networks, will only be used with your consent.
Decline Accept all Configure