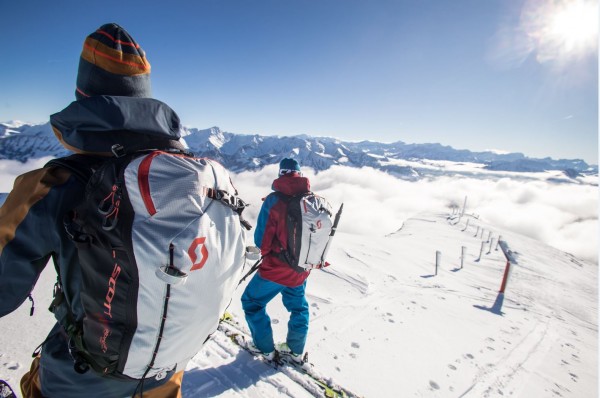 Kai, you take almost every opportunity to get into the powder. What is the attraction of touring / freeriding for you?

The freedom and especially the peace and quiet outside of the slopes or the world of work. After such a day in the mountains, you will be more relaxed and motivated to start the workday again.

Where have you been freeriding and what impressed you the most?

Most of the time I move in the Northern Alps, because it is "fastest" to reach us from the north. But I have also been skiing in Canada, in Slovakia, in the whole Alpine region and on the Lofoten Islands. Actually every day in the mountains impresses me. Scenically, the Lofoten have impressed me the most. Beautiful mountains and downhill runs to the sea. A dream.

What is important in freeriding?

You should be aware that freeriding in open terrain is very different from skiing on the slopes. First of all, skiing in deep snow makes considerable demands on your skiing skills, which is why inexperienced skiers should avoid the big adventures.In addition, you can usually just go for it on the slopes without having to think about it. On the other hand, if you want to go off-piste, you should be able to correctly assess the snow and weather conditions in order to minimize the risk of being buried. In any case, it is advisable to entrust yourself to an experienced mountain guide and generally not to be on your own.

The third point to think about is the equipment. Because for freeriding you not only need completely different skis, you also need some things that you don't need on the slopes. Even if you don't want anyone to do it, the risk of being buried can never be completely eliminated in the off-piste. Therefore it is very important to have the right avalanche equipment with you and to train the handling of it as often as possible, so that you can behave correctly in case of an avalanche. Avalanche transceivers, avalanche shovels and avalanche probes are the absolute basics, without which no one should venture off-road. Because once you are buried, the chances of survival drop rapidly after about twelve minutes and even with the right equipment and a lot of practice it is a very difficult task to find and dig out a buried person during this time.

What does an avalanche backpack do in terms of risk minimization?

Even if no avalanche equipment can guarantee one hundred percent safety, the avalanche backpack can make a decisive contribution to risk minimization by increasing the chances of not being buried in an avalanche. A triggered airbag increases a skier's volume by about 150 to 200 liters at a single blow, which should result in a person floating up in the avalanche, so to speak. Behind this is a physical principle called the Brazil nut effect or segregation, which means that bodies with a higher volume are floated to the surface in a flowing mass, while smaller bodies sink. Because of this principle, the nuts in a pack of muesli always end up on top and the linseed leaves on the bottom.

So, would you advise all freeriders and tourers to seriously consider buying an avalanche backpack?

Yes, definitely. Although backpacks cost a lot of money, they can significantly increase the chances of survival in case of an accident. In addition, there is a lot of pressure on the market to innovate, so in recent years backpacks have become increasingly user-friendly, lighter and also somewhat cheaper. Meanwhile there is also a whole range of models, so that there should be something for everyone.

One of the latest innovations is the avalanche backpack Patrol by Scott. You had the opportunity to test this backpack. What makes the Scott Patrol different from other systems on the market?

The greatest feature of the Scott Patrol E1 backpacks is certainly the electronic release system developed in cooperation with Alpride. Many other airbag systems work with compressed air-filled cartridges, which has two major disadvantages: Firstly, the cartridges often cannot be transported in an airplane, and secondly, the cartridges have to be replaced or refilled after each deployment, which makes practice at home very complicated and expensive and can also mean that the airbag cannot be made to work again after a false deployment on the mountain. There are other electronic release mechanisms on the market, but they are usually much heavier and mostly work with lithium-ion batteries, which you normally don't use to get on the plane.

And this is not the case with Scott?

No, the Alpride release system is not as light as most cartridge systems, but with a weight of 1280 grams it is quite close. In addition, the Alpride E1 airbag system works with so-called "supercapacitors", which store the energy required for inflation instead of the batteries. These capacitors do not cause any problems during luggage checks and are also much less susceptible to cold than conventional systems.

How exactly do these super capacitors work?

The release works mechanically, like in cartridge systems, by a strong pull on the release handle, which is attached to one of the shoulder straps. Once activated, the capacitors transfer a lot of energy to a blower in a very short time, which then creates an air suction and sucks in the ambient air. The resulting pressure causes the airbag to reach its maximum volume within seconds.

The energy stored in the capacitors is theoretically sufficient for two or three trips, but it is best to recharge after each trip. This is even possible when you are on the road, because the capacitors can be charged not only via a USB port, which takes about twenty minutes, but also with two standard AA batteries, which simply have to be inserted into a small compartment. So you can easily and free of charge perform any number of test activations and then all you have to do is recharge, release the air from the airbag via a valve and fold it back into its compartment.

What about the rest of the equipment and feel of the Patrol backpacks from Scott?

The Scott Patrol 30 actually has everything you need for a day's off-roading: a spacious interior compartment and numerous features such as ski holders, daisy chains, straps, helmet net and ice axe holder, which allow the equipment to be securely attached to the backpack. If you want to carry a little more equipment, such as climbing gear, ropes or professional camera equipment, you can also grab the larger Scott Patrol 40.

If you don't fully utilize the storage volume of the backpack, it can be easily compressed and lies comfortably close to your back so that mobility and balance are not affected. The only drawback is perhaps the somewhat spartan hip belt, but this only becomes noticeable when you want to carry a lot of weight. All in all, the system is a round thing.

Tags: Avalanche Bag
Trusted Shops Reviews Toolkit: 1.1.5
This website uses cookies, which are necessary for the technical operation of the website and are always set. Other cookies, which increase the usability of this website, serve for direct advertising or simplify interaction with other websites and social networks, will only be used with your consent.
Decline Accept all Configure