Salomon S/Lab Shift: The allrounder for your next ski tour 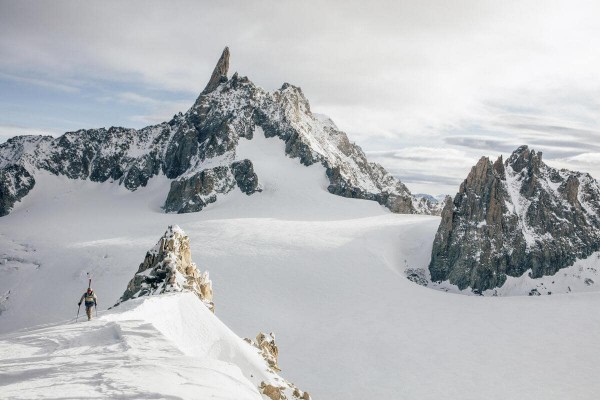 For us, nothing is more beautiful than leaving everything behind for once and immersing ourselves in untouched nature. It is no wonder that ski touring and freeriding are becoming more and more popular. Especially because last winter, due to the Corona pandemic, many ski resorts were closed for a long time or only limited, many have dealt more intensively with the topic for the first time. And probably found out that it is not so easy to put together the right equipment.

Many different manufacturers are now developing and offering a whole host of ski, boot and binding models for use far from the groomed slopes - all of which are optimized for different types of use and, to make matters worse, are not always technically compatible with each other.

Ski bindings: The agony of choice

It becomes especially persistent when choosing the right binding for the touring set-up. As the link between the skier and the ski, the binding plays an important role in the off-piste set-up. The choice of binding determines what type of ski boot can be used with what type of ski and what type of activity can be performed better.

Quite fundamentally, a distinction is made between two different types of touring bindings, each of which has different advantages and disadvantages:

With pin bindings, the ski boot is fixed in the front toe and, on many models, also in the rear toe by pins that snap into the corresponding receiving holes on the side or rear of the boots. To ascend, the heel is freed and the boot rotates around the front pins as you walk. One disadvantage of this system is obvious: it can only be used with ski boots that have corresponding pin inserts, so not with normal alpine boots. But since there are now a lot of so-called hybrid boots, i.e. boots that have a sole with alpine standard and pin inserts, this problem can be solved relatively easily.

Pin bindings have the great advantage of making climbing pretty easy. Depending on the model, they are either light or very light, the stance height is very low and the pivot point of the boot is close to the metatarsophalangeal joint when climbing, making a fairly natural walking motion possible.

The disadvantage, on the other hand, becomes apparent on the descent: with most pin bindings, precise edge pressure cannot be built up nearly as well as with good alpine bindings. It is also problematic that the release of many models is not Din-certified, and the very light models even do without safety release. Although most pin bindings, of course properly mounted and adjusted, are also quite safe, but the risk of false releases and non-releases in falls and thus the risk of injury is quite increased compared to alpine binding. And also entry and exit are not quite as easy with pin bindings as most skiers are used to from their alpine bindings.

Frame bindings for safety during the ski tour

Frame bindings, like normal alpine bindings, consist of adjustable front and rear jaws and are mounted on a frame or rail that can be loosened at the rear for ascents and then rotates around a rail at the front.

Frame bindings have the advantage that they can usually be used not only with special touring or hybrid boots, but also with standard alpine models. In addition, they also offer the support and safety of good alpine bindings and are therefore much more suitable for the usually quite aggressive skiing style of freeriders.

The big disadvantage is the usually quite high weight compared to pin bindings and the fact that a good part of the binding sticks to the foot, so to speak, when climbing and must be lifted with every single step. And because the pivot point of frame bindings is quite a bit in front of the big toe, climbing feels quite awkward. The very high stance also means that power transmission is not quite as good as with normal alpine bindings.

The right choice is not so easy

For a very small percentage of very ambitious alpinists, putting together the perfect set-up is pretty straightforward. Namely, for touring skiers whose only goal is to make as much distance as quickly as possible: A lightweight touring boot with a treaded sole, an extremely light, barely waisted ski and a very light pin binding, and off you go on the route.

But let's be honest: most of us are not these extreme sports enthusiasts. From the beginner who doesn't quite know how often he really wants to go touring, to the rider who wants to use one piece of equipment both on and off piste, to the freerider who still wants to find the last untouched spot- It's not so easy to find the ideal binding.

Manufacturers have also understood this - and in recent years have been thinking about developing hybrid bindings that combine the ascent comfort of a pin binding with the safety and power transmission of alpine bindings, sometimes with more and sometimes with less success.

An outstandingly good attempt comes from the ski manufacturer Salomon. With the S/Lab Shift, nothing less is attempted than a so-called "revolution in touring bindings". This revolution was initiated by the notables from the in-house freeski team such as Mike Douglas, Cody Townsend, Chris Rubens and Greg Hill, who expressed their dissatisfaction with the available binding systems at a meeting in 2012.

Countless prototypes are developed and tested in close cooperation with the athletes - until they found something that could also satisfy their extremely high athlete demands.

The result is - there is no other way to put it - a masterpiece of engineering. Combining the advantages of pin and alpine binding has largely succeeded and thus the great goal seems to have been achieved.

Long way up, crazy way down: anything is possible

The core of the new Salomon Shift binding is the full-fledged alpine toe piece, which can be converted into a pin binding in a few simple steps thanks to the integrated pins. The rear jaw also offers the support of a high-quality alpine binding in downhill mode and can be converted for the ascent so that it releases the ski boot. The binding automatically brings a 2° climbing aid in walk mode, and when the going gets steeper uphill, a 10° climbing aid can be folded out. For those who like to ski on ice, the Shift can also be used with crampons

What this means for you when going uphill is that with the Salomon Shift you can enjoy the range of motion and natural pivot point of a pin binding. Although the Salomon Shift with 1700 grams of weight is slightly heavier than most pin bindings, but because the heel is exposed during the ascent and the buttstock therefore does not have to be lifted with every step, it runs much easier than all frame bindings.

If the Salomon Shift is then set to downhill mode, it is no different from good alpine bindings. The Shift not only gives a much better feeling of ski control than normal pin bindings, it also offers more safety. Unlike pin bindings, the Shift allows precise adjustment of the front and rear toes. In the Salomon S/Lab Shift MNC 13 up to a release value of 13, in the Salomon S/Lab Shift MNC 10 up to a value of 10. In addition, the binding has captivates with lateral elasticity. In this, let's say, "clearance" the ski boot can slide back and forth before it flies out of the binding. This elasticity makes it possible to absorb hard impacts to a certain extent without the binding releasing immediately - and especially in freeriding, such short peaks in the load are not uncommon.

The Shift is suitable for just about everything you could imagine on the mountains: Long climbs, wild freeride descents but also for days on the very normal slopes - actually you go with her at no point a lazy compromise.

The Salomon Shift Pro ski boots are aimed primarily at skiers who prefer to plow through untouched powder snow at full speed, but also like to hike a new peak from time to time or want to be well equipped for descents on the hard slopes. They combine the stability and power transmission of alpine boots with the flexibility of touring boots.

Touring-specific features such as the Surelock walk mechanism equipped with a climb mode with 40 ° angle of movement, tech inserts for the pins, low weight and the Contagrip inserts ensure that the Salomon Shift can easily handle longer or more demanding routes. And thanks to the Coreframe construction known from the Salomon Alpine boots, the Custom HD shell and the seamless Race liner, you also do not have to compromise in terms of power transmission and fit.