GripWalk in detail: How do the new ski boot soles work? 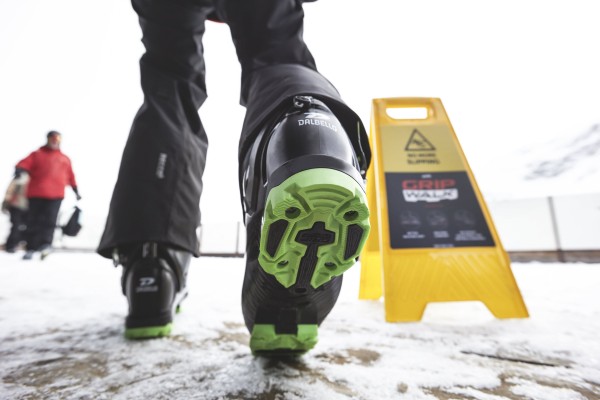 In short, GripWalk is a new standard for the boots' heels and the bindings in which they should fit. Almost all major manufacturers have agreed on this new standard. In contrast to classic ski boot soles, the GripWalk soles are slightly raised in the front area. The GripWalk soles are also equipped with a strongly ribbed rubber profile at the front and back, similar to a touring shoe, but also have a hard part that is in direct contact with the binding.

The new GripWalk bindings also look a bit different than the classic alpine bindings: All models have a slightly rockered glide plate that contacts the hard part of the front sole and ensures precise tripping.

The crucial advantage of GripWalk soles is shown when you walk a few steps. Often enough, the path from the gondola to the car, the stairs down to the toilets or the few steps to the beer during Apres-Ski are a real breakneck danger. Especially when you have to cross icy areas, the slippery and stiff heel plates of classic alpine shoes make it risky.

With the new GripWalk soles you have a much better grip on smooth or sloping grounds thanks to the softer and ribbed foot surfaces. In addition, with the GripWalk sole, you don't have to walk around awkwardly, as with the old soles, because of the raised front plate, rather you can walk around like wearing normal street shoes.

None, actually. The new soles succeed in combining the advantages of classic alpine shoes with those of touring shoes. The improved running characteristics do not compromise safety or power transmission. The GripWalk bindings, which are matched to the new soles, ensure that no force gets lost. And the release of the binding is just as precise as before.

Compatibility of ski boots and bindings

Most shoes equipped with GripWalk soles can be converted to the old types of soles (which are usually included with the shoes). If you have new GripWalk boots, you should make sure that they are equipped with a GripWalk compatible binding, especially if you rent skis.