Giro and the perfect ski helmet? 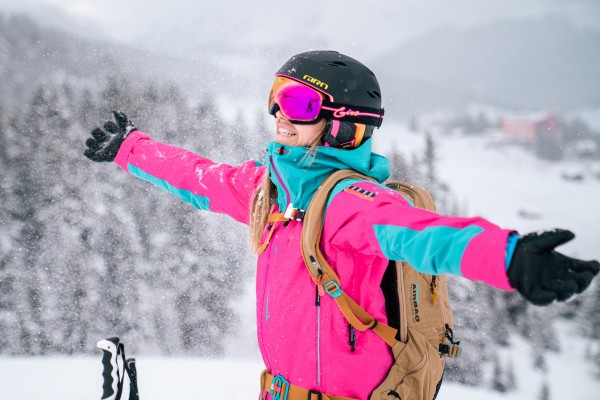 The innovation in the field of ski helmets is a very important matter, because it is about protecting our heads. Because no matter how good we are at skiing: A fall can always happen. It doesn't even have to be your own fault. And in EVERY fall, the head can be seriously injured. A good ski helmet must therefore optimally protect the head from the effects of any kind of fall - and should be as comfortable as possible and not interfere with the ride. Because only when you feel safe can you enjoy the descent to the fullest. Oh, and the perfect ski helmet should also look good ;-) and they do!

Giro Helmets: Over 35 years of experience

In order to keep reinventing itself over such a long time, one thing above all is necessary: the will to constantly develop. Because even if a helmet already protects well and fits well, protective function and comfort can always be optimized. The prerequisites for this are attention to every detail and the willingness to think outside the box and bring in outside scientific expertise when necessary. Few companies meet these requirements as well as Giro. Because since Giro was founded in Santa Cruz, California over 35 years ago, the company has dedicated itself to constantly pushing development forward, paying attention to every detail, using scientific findings and thus providing the best possible equipment to the skiers of this world.

The most manifest expression of this objective is, in addition to the helmet test laboratory, the so-called Dome, which is unique in the industry, the product range of Giro. Because this has evolved and diversified more and more over time. Originally, Giro is based in bicycle racing. From cycling they bring their experience to skiing.

Protect your head, because you still need it!

An important development step compared to the usual hard shell helmets was the development of the so-called in-mold construction, in which the robust outer shell is glued to the impact-absorbing inner shell in a single operation during foaming. This provides greater resistance without adding weight and also allows the construction of significantly better ventilation systems. This proven construction method is still used today in helmets such as the Giro Neo and the Giro Nine.

Giro took another important step toward safety when it became the first ski helmet manufacturer to introduce the MIPS system. To do so, Giro spent years collaborating with the external designers behind MIPS. MIPS technology was developed by scientists at Karolinska Hospital and the Royal Institute of Technology in Stockholm, Sweden, and is based on nearly 20 years of academic research.

The basis for MIPS technology is the fact that not only linear forces act on the head during falls, but also rotating forces - and these cannot be sufficiently mitigated by conventional helmets. The solution to this problem is an expandable fastening system between the outer shell and a thin low-friction inner shell. In the event of an oblique impact, the elastomeric fastening system stretches and the outer shell can rotate independently around the head, significantly reducing the extent of the rotational forces acting on the brain. This system is installed in all helmets with the name suffix MIPS, such as the Giro Neo MIPS. Another further development is the hybrid construction, which combines the advantages of hard shell and in-mold construction by combining a very resistant hard shell upper part with an in-mold side part to form a mixture that is as robust as it is lightweight and well ventilated.

For a helmet to provide good protection, it has to fit well. That's obvious so far. Because a helmet that wobbles or sits too far up on the head can only insufficiently fulfill its protective function - no matter how well it is built. That's why Giro has developed its own fitting systems over the years, starting with the In-Form-Fit system . With this system, not only can the volume of the helmet be adjusted by up to six centimeters by means of an easy-to-use ergonomic adjustment knob, it also allows for vertical adjustment to fit different head shapes and ski goggle heights. Even more innovative is the In-Form 2-Fit system, which features an even lighter weight and lower profile than the original and is installed in top models such as the Jackson MIPS and the Strata MIPS.

Intelligent ventilation for a better climate

A good helmet also needs good ventilation, and Giro took that into account: One important finding was that ski goggle fogging is often caused by warm air collecting on the head. To remedy this, Giro installs stack-vent vents above the goggles, which ensure that warm air can escape directly through the helmet to the outside. Meanwhile, the Giro standard also includes a ventilation control with the Thermostat Control System, which helps to regulate the air flow by means of a quick and easy-to-use adjustment knob. Even better is another new development from Giro, the Passive Aggressive Venting system. This discreet but powerful system regulates airflow and temperature virtually fully automatically, both while standing, walking and at full speed. This new technology is installed exclusively in the Jackson MIPS.

You can see: The development department of Giro is always good for large and small innovations. And we haven't even mentioned meaningful little details like the magnetic Fidlock closure, the patented Polartec lining or the integrated camera attachment. And we're sure: That's not the end of the story. The next innovations are certainly already in the pipeline.

Tags: Ski helmet
Trusted Shops Reviews Toolkit: 1.1.5
This website uses cookies, which are necessary for the technical operation of the website and are always set. Other cookies, which increase the usability of this website, serve for direct advertising or simplify interaction with other websites and social networks, will only be used with your consent.
Decline Accept all Configure