Freeride: The V in Völkl stands for variety! 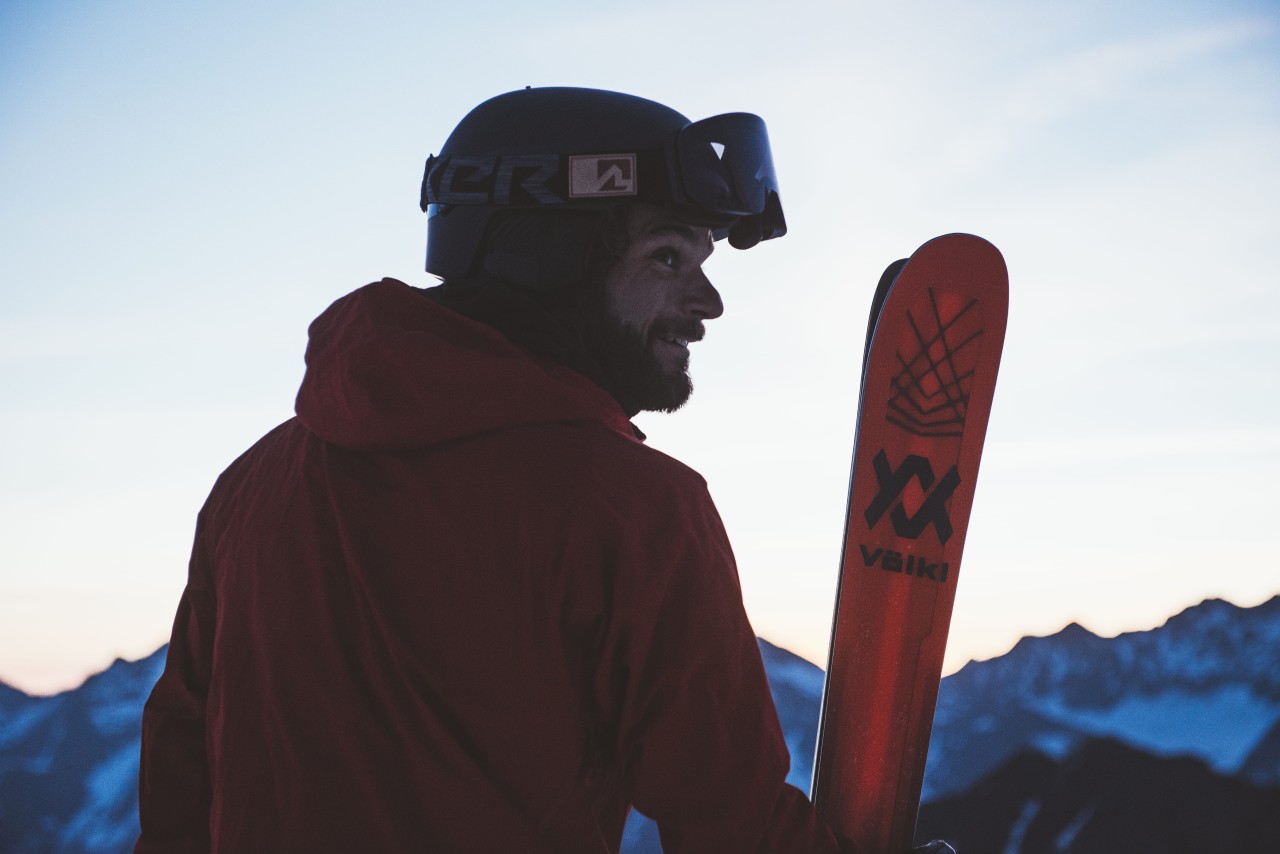 The freeride area in particular has many faces. Because in deep snow and off the slopes you can experience a whole range of very different adventures. From extended touring ski hikes to adventurous descents in knee-deep powder and untouched slopes to tricks and jumps that turn the whole mountain into a playground. There are plenty of possibilities.

In order for all freeriders to be able to follow their own personal call to the mountains and for each of them to be able to find the ski that exactly fits their needs, it's not enough to have just one or two freeride models. Hardly any ski manufacturer has understood this as well as Völkl. A quick look at Völkl's extremely wide range of off-slope products is enough to realise this. There really is something for everyone!

As a guide, we would like to introduce you to some of the latest and most important models and their respective areas of application.

Let's be honest - do you know what you want? Many skiers can't really say exactly what they want: They like to ski deep powder frequently, but they also want to take the slopes with them from time to time, and they don't want their skis to flap. Normally, such skiers are in good hands in the all-mountain area. But especially in heavier and wetter deep snow, a "normal" all-mountain ski with a centre width of around 80mm is not really sufficient to reliably prevent "sinking".

Völkl has also recognised this and accordingly has a number of models in its range to close this gap between all-mountain skis and pure deep-snow specialists.

A particularly good example is the latest addition to the Mantra family - Völkl M6 Mantra. With its 96-mm centre width, the new model is just as suitable for use on groomed slopes as it is for off-piste, is both sporty and playful and shines with great radius variability.

Among other things, the latest inventions of the Völkl developers are responsible for this: Tailored Titanal Frame, Tailored Carbon Tips and the well-known technology of the 3D Radius Sidecut.

With the 3D Radius Sidecut, three different radii are combined in the ski and are smoothly connected with each other over the entire length of the ski. The larger radii in the start and end areas are suitable for long turns and ensure smooth running even at high speed. They also make the shovel smoother and more resistant in challenging off-piste snow conditions - such as deep and wind-blown snow or broken slush. The ski is easier to steer, cuts less and the range of turn radii is noticeably more varied. The narrower radius in the centre of the ski favours short turns and offers effortless support even at a quieter pace. This makes the M6 Mantra very agile, manoeuvrable and also ideal for narrow passages that require quick changes of direction.

The key technology Tailored Titanal Frame is found in the M6 Mantra. The special feature here is the width of the titanal frame. It is adjusted to the length of the ski. In this way, the amount of damping and torsionally stiffening titanal in the ski can be tailored to the body size and weight. In the longer models, more titanal is processed and thus the torsional stiffness is increased, which leads to a more direct power transmission and improved absorption for taller and heavier skiers. The shorter the model, the less Titanal, which makes the ski more manoeuvrable, so that smaller and lighter skiers can take advantage of the full variability of the ski with less effort. In the binding area, a second, thinner titanal sheet gives the ski the necessary strength and allows it to be built softer in the middle. The result is an incomparable combination of liveliness and speed resistance

A central role is also played by the Tailored Carbon Tips, which are only processed at the point where they selectively reinforce the torsional stiffness of the ski precisely in the area of the first contact between the shovel and the snow. This leads to a very precise response of the shovel at the beginning of the turn and supports an agile and very reliable retraction of the ski, especially on compact snow surfaces. Just behind the shovel, the torsional stiffness of the ski is significantly reduced again to ensure a smooth transition to the rest of the ski and thus its playful handling. Compared to its predecessor, the M6 Mantra is noticeably more fault-tolerant and offers sporty skiers more liveliness and dynamics.

A ski that goes a little more in the direction of a "normal" all-mountain ski and thus towards suitability for the piste is the Völkl Kendo 88. With 88 mm under the binding, this ski is a little narrower and skis almost as grippy and aggressive as a regular sports carver on the groomed slope thanks to the 3D Radius Sidecut, the continuous sidewall and the Titanal Frame, but thanks to the tip-and-tail rocker and the damping carbon shovels that reduce swing weight, it also offers the possibility of playful skiing or the odd detour into deep snow. Just the right ski for piste racers who are looking for a ski that allows them to go off-piste sometimes.

Not least when the lifts were closed due to the pandemic, touring gained in importance. It's the freedom that athletes rave about. The chance to get away from it all and the feeling of being on the move individually, away from the crowds - this emotionality and passion, coupled with the highest technological quality, is what the Völkl company unites in its "Rise" touring series.

These skis are also equipped with the 3D Radius Sidecut and thus achieve great flexibility, which saves the ski tourer energy and effort when carrying heavy luggage or when adverse conditions demand everything from him at the end of a long ski tour, and enables him to more easily act on the manoeuvrability of the ski in certain situations - for example in forest sections.

Speaking of power and effort: with touring skis, the most important thing is low weight - after all, the skis have to be lifted with every step. That's why Völkl has developed a complex stick wood core for the Rise series with the Hybrid Tourlite wood core, in which only the lightest batch of each wood delivery is processed. This allows the Rise Above 88 to achieve an extremely low weight of 1186 grams on a 170 cm length without losing stability.

In addition, the Rise models come with Völkl's tried-and-tested Smart Skin-Clip skin binding system. An elastic, easy-to-grip snap hook ensures that the skin can be put on and taken off not only from behind as standard, but also from the front. This means that the skier can choose a variant depending on the situation and can easily put on and take off the skins even when wearing gloves. A discreet recess in the shovel gives the hook lateral guidance and prevents unintentional loosening of the skin when walking.

Völkl Mantra V-Werks: The all-rounder among the versatile ones

The Völkl Mantra V-Werks is another very special mix that combines suitability for the piste with good handling in deep snow and suitability for shorter ascents. With this ski, the exceptionally good ratio of particularly low weight and good edge grip and smoothness is particularly impressive.

This is mainly due to the 3D.Ridge construction with carbon titanal strap and full carbon sheathing. The wooden core, which is raised in the middle of the ski, flattens out considerably towards the sides, resulting in a significant weight reduction with a simultaneous reduction in swing mass. The carbon sheathing provides the necessary stability.

In addition, the partial sidewall in the middle of the ski ensures direct and very solid power transmission. In combination with the centre width of 99mm, the pronounced tip and tail rocker and the very large radius, this makes the Mantra V-Werks a ski that is very manoeuvrable on the slope as well as in powder and conveys safety at the same time.

In addition to the skin pins in the tip and tail, the special surface structure of the Ice-Off topsheet, which literally slides off the snow and prevents icing, also ensures touring suitability.

The Völkl Revolt 121 and the Völkl Revolt 104 stand for a completely different kind of fun in deep snow. Nosebutters, slashes, smears, jibbing, kicking - if you not only know what that means, but also how to do it, you've made a real catch with the Revolt models from Völkl.

This is primarily due to the 3 radius sidecut and a specially shaped nose that enables butter tricks and drift turns, especially in soft snow. The Tough Box construction and the multilayer wood core make the ski strong enough for all challenges.

The pronounced rocker and taper on the tip and tail make the Revolt series skis extremely playful and easy to turn, the discreet camber under the binding and the full-length sidewalls give the skis enough pressure and ski control for descents on the groomed slope.

All in all: skis that are simply great fun everywhere and extremely versatile.

Tags: Freeride
Trusted Shops Reviews Toolkit: 1.1.5
This website uses cookies, which are necessary for the technical operation of the website and are always set. Other cookies, which increase the usability of this website, serve for direct advertising or simplify interaction with other websites and social networks, will only be used with your consent.
Decline Accept all Configure