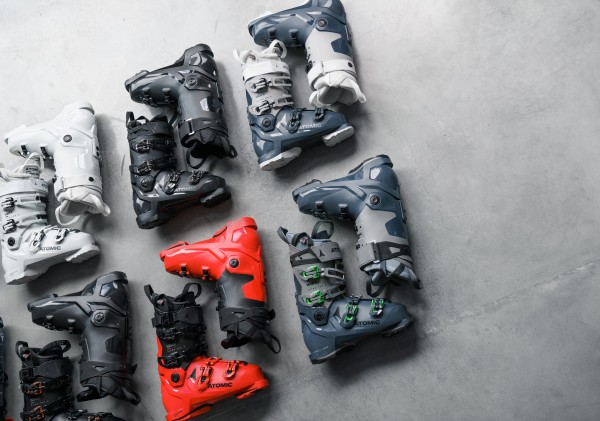 Professional racers have high demands - on themselves and on their material. In ski racing, it's all about milliseconds and zenith decisions. That's why professional athletes put a lot of effort into their careers. They invest a lot of energy and time in challenging and hard training, and, in order to keep up with the high level, they also invest a lot in their equipment: it is common for the top athletes to own several specially made skis that are precisely tailored to their requirements, they have their own service people who work on the skis after every run and adjust the wax, edge and structure grinding precisely to the current weather conditions - even their ski boots are true works of art that are precisely adapted to the peculiarities of their feet by hand with millimeter precision. This enables perfect power transmission.

The human foot - a miracle of nature

Just like the perfectly fitted ski boot, the human foot is a miracle. Even though it may not be the most popular part of the body. And just like the person who walks through the world on them, each pair of feet is unique. The human foot normally consists of 26 bones. In a not-so-small percentage of the population, additional bony structures are added. The most common, for example, is the ganglion on the navicular bone. In addition, there are 33 joints, the best known being the ankle joint, which connects the foot to the calf and shin. 20 muscles, 114 ligaments, a complex system of arteries and veins and 1700 nerve endings make up our foot. Just as complex as the structure of the feet are the tasks they have to perform and the stresses they have to withstand: Our feet carry us through life, supporting our bodies when we walk and stand, and withstanding extreme loads when we run, hop and dance. You could almost say: without our feet, we would not make one step forward in life.

Your foot - as unique as the person standing on it

With all these individual parts mentioned, you can imagine that no two pairs of feet are exactly alike: one foot is wider, the other narrower, one has a more pronounced ankle, the other less so, one has a long big toe, the other a short one. In addition, there are numerous widespread deformities such as flat feet, hollow feet, bent feet, flat and splay feet, deviations of the vertical foot axis, hallux valgus, ganglions, in short: the variety of forms is almost inexhaustible. Believe us when we say that we have seen it all in the ski shop!

In everyday life, all these differences usually don't play a particularly important role - but when skiing, they become decisive in the war. Because when skiing, the stresses to which the feet are exposed are particularly high and the tasks they have to perform are especially important: In the ski boot, they form the link between the body and the ski, carrying and distributing our weight and transferring the force of our body movements to the ski. In order for them to perform these tasks precisely, the ski boots must not fit too loosely under any circumstances.  But so that the stresses are not too great and no pain is caused, they must also not fit too tightly anywhere. In short, ski boots have to fit as perfectly as possible - and because of the large number of different individual foot shapes, it is almost impossible for an unadapted ski boot "off the rack" to fit just so perfectly. So it's no wonder that ski pros do everything they can to get a ski boot that's perfectly tailored to their feet and their needs.

And what about us? What if our name isn't Mikaela Shiffrin or Marcel Hirscher? Thanks to thermoformable inner shoes and adaptable ski boot shells, which have long since become the norm in qualified specialist shops, we too can achieve a great deal of individual adaptation, and the vast majority of skiers are able to achieve good to very good results in this way.

One point that is often neglected when buying ski boots is the fact that our feet also have an underside. And it is precisely this that is exposed to great stress when skiing: In the ski boot, the sole of our foot is more or less fixed for a longer period of time, the body weight is distributed unevenly over the sole, especially in the case of foot or knee malpositions, and there is hardly any way to relieve the stressed areas for a change. In addition, the uneven contact surface prevents optimal power transmission over the underside of the foot and thus reduces ski control.

In racing, therefore, it is nowadays a matter of course that the pros use specially adapted insoles that relieve the strain on their feet and help them deliver the best possible performance on the slopes. And there's really no reason why individually fitted insoles shouldn't be just as much a matter of course in the leisure sector - especially for ambitious skiers who have problems with foot malpositions. After all, with a comparatively small amount of effort, custom insoles can achieve a number of advantages that cannot be achieved by fitting standard ski boots alone: The position of the foot in the boot is so improved by the insole alone that fewer adjustments to the inner boot and shell are necessary. In addition, the body weight is distributed evenly over the entire sole of the foot, which provides noticeable relief in the long term and allows body movements to be transferred more precisely to the ski.

For those who want to go one step further and get even closer to the ski boots of the pros, traditional manufacturer Atomic is launching the Atomic Hawx Ultra 115 W Professional and the Atomic Hawx Prime 130 Professional ski boots for normal consumers, which surpass most other models in terms of adaptability. Admittedly, the effort is a bit higher than that for an insole, but especially for very sporty and ambitious recreational skiers or for skiers whose foot problems cannot be controlled by conventional ski boot fitting, this effort might be worth it.

The new Professional models from Atomic differ from the other shoes in the Hawx model series primarily in that they are equipped with the Mimic Professional liner. This liner combines the advantages of the thermoformable liner widely used in the trade with those of the classic "foamed" liner - making both better. Like other Hawx models, the Professional liner features thermoformable Mimic material in the heel and ankle areas, and the tongue and cuff in the calf area are also customizable with heat. In the heel and ankle area, precisely the area that is most important for support in the shoe and for power transmission, a newly developed foam can also be injected. The advantages are obvious: with thermoforming, the adjustment is made by compressing the inner shoe in the places where pressure is exerted by the foot, creating more space where it is too tight. This gives the foot enough room everywhere, but it doesn't fill cavities, so it's always possible to still have a little too much play in the shoe. The injected foam, on the other hand, adapts to the individual anatomy with millimeter precision and literally fits like a glove.

In addition, the foaming process distributes the material absolutely evenly throughout the liner, so that - unlike the thermoformed liner - it has exactly the same density everywhere. And thanks to the firm Mimic material around the foamed areas, the Professional Mimic liner is extremely stable in the shell. This brings the benefit of a more even and better power transmission, exactly as intended with the shell construction - providing better ski control, more fun and better performance.

Two further features of the Hawx Professional series offer even more improvement in power transmission and fit accuracy: thanks to the V3 tongue system, the position of the tongue can not only be changed at will, the skier even has the choice between three interchangeable tongues, each with high, medium or low volume. The sensitive interface between shin and cuff can thus be optimally adapted to individual needs. The Professional Dual Strap, on the other hand, holds the entire system together and has a static and an elastic part. The elastic one allows the ski boot the necessary elasticity during the turn, while the static one stops the movement at the end of the turn and transfers the skier's energy directly to the ski. The basis for this concept was the conventional Power Strap, which Atomic has now developed into a dynamic and functional element.

So you see: Atomic has thought of just about everything to allow even recreational skiers equipment at the very highest and professional level. By the way, also to those who have bought models of the Hawx Ultra or Hawx Prime series in recent years. Because also these models can be upgraded since this winter with the Mimic.Professional liner and Professional Dual Strap.

Tags: Ski boots
Trusted Shops Reviews Toolkit: 1.1.5
This website uses cookies, which are necessary for the technical operation of the website and are always set. Other cookies, which increase the usability of this website, serve for direct advertising or simplify interaction with other websites and social networks, will only be used with your consent.
Decline Accept all Configure